The Sisters South peak in Lee Canyon, Nevada, elevation 10,197 feet has a great trail, spectacular views and is relatively unknown as a destination. As a result, the entire area sparkles with pristine wilderness beauty and you have a good chance of being the only person on the trail, even on a weekend day. On a Saturday in mid-June I saw only 2 people the entire day.

The Sisters South peak trail is unmarked, which in part accounts for the solitude you will experience on this adventure. You have to know where you’re going to find the trail which branches off from the upper end of the Old Mill Picnic Area in Lee Canyon and then branches off again onto a very faint trail which is easy to miss. That second faint branching trail will become more clearly defined in about 50-100 yards and will take you all the way to the summit of the Sisters South peak.

The stunning 360-degree views from the Sisters South peak include Mummy Mountain, the North ridge of Kyle Canyon leading from Mummy Mountain to Lee Peak and Charleston Peak, which are also visible. You can look down into upper Lee Canyon to the ski area and sections of the lower Bristlecone Pine Trail, then look upward to the ridgeline tracing the route of the Bonanza Trail to McFarland Peak and Bonanza Peak, which are also visible. Continuing in a counterclockwise circle there are views of Macks Peak, the Sisters North Peak, Black Rock Sister and the Northern corridor of Hwy 95 in the distance. You can see Lee Canyon Road stretching below all the way to its intersection with Hwy 95 and beyond to the Sheep Range, Gass Peak and the Northern Las Vegas Valley. Completing the 360-degree circle, Angel Peak is visible, then you’re back at Mummy Mountain. This is just a summary of some of the main reference points. There are many more.

The best time of year to visit the Sisters South Peak in Lee Canyon is late May or June after the Winter snows have melted and before temperatures rise to their Summer highs. September and October are also good months. Of course, if you’re into navigating snow, you can visit the Sisters South Peak throughout the Winter months. On the day of this adventure in mid-June it was about 100 degrees in the Las Vegas Valley but in the morning hours, under 40 degrees at and near the Sisters South Peak summit, along with roaring winds that sounded like a freight train as they rushed through the trees. That’s a 60-degree differential in one day!

There is a fee to park in the Old Mill Picnic Area, but on the other side (East side) of Lee Canyon Road just before the turn-around there is a wide area where I have parked free many times. There was actually a row of cars there to greet me at the conclusion of this adventure. An additional reason to park outside the Old Mill Picnic Area is that it is gated off in the early morning hours of the day. So if you’re starting at sunrise on a late Spring through early Fall day, The Old Mill Picnic Area gate will likely be locked.

The South side of the Sisters South Peak has an Eastern summit, a Western summit and a shallow saddle between. The two summit areas are guarded by sheer cliffs to the South. The area between is a more gradual class 2-3 summit approach. There are 3 main ridges leading up to South side of the Sisters South Peak. The most Eastern ridge leads up to the cliffs at the base of the Eastern summit. The middle ridge leads more directly to the mid-section of the Sister’s South Summit where the final summit approach is located. The Western ridge is a longer, but more gradual route and the only route with a trail all the way up. For most, it’s the preferred route to the summit. I took the middle ridge route on the ascent, then followed this main Western ridge route on the return trip.

Beginning at the Old Mill Picnic Area, follow the paved road up past all the picnic areas to your left (South). Just after the top of the upper picnic area a wide unmarked gravel trail will branch off to the right (rocks laid out to mark a border on each side of the trail). Continue on this border-lined trail for about a quarter mile, then take a right onto a small use trail that branches off to the Northwest. Watch closely, because it’s very easy to miss the faint narrow use trail! The use trail will become more well defined and eventually lead all the way to the summit.

On the day of this adventure, I jumped the gun, leaving the use trail within about a quarter mile, turning right (North) to head up the middle approach ridge toward the Sisters South peak. The ridge was very steep (nearly a foot elevation gain per step) with a loose rock surface so I referred to it as “The Slope of Death“. It wasn’t all that bad, and eventually took me to the place where the middle ridge reconnected with the main trail I had left earlier.

If You Stay on the Main Use Trail (Western Approach Ridge)

Summary to the Sisters South Ascent and Descent

The entire adventure is about 8 miles round trip on fairly good trails all the way to the brief class 3 final Western summit approach if you take the main use trail all the way up. Your total ascent is around 2,000ft and there are no major dips along the way to measurably add to that number. In short, for a hike of this difficulty level (moderate > difficult) there’s a big reward! 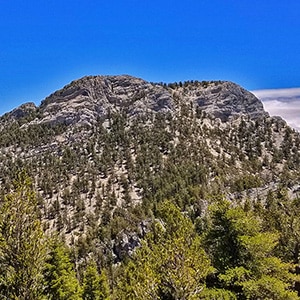