Why a Mid-Ridgeline Approach is Important

Incredible Views: The Rainbow Mountains Upper Crest Ridgeline offers incredible views of the entire Rainbow Mountains Wilderness from above. These mountains are spectacular Aztec Red and calico frozen sand dunes from the ancient Jurassic Era, 201.3 million to 145 million years ago. In addition, from the Upper Crest Ridgeline there are unique views of Red Rock Canyon, the La Madre Mountains, the Las Vegas Valley to Lake Mead and points beyond, the Mt Charleston Wilderness, Lovell Canyon, Potosi Mountain and too many additional points beyond to list here.

Wilderness Emersion: The Upper Crest Ridgeline is also a total emersion in a remote wilderness area. I’ve gone hours, even complete days on the ridgeline without seeing another person. There is a faint ghost trail which appears, disappears and reappears along the length of the ridgeline. However, the route is pretty easy to maintain as there is a dramatic drop-off to the East and a more gradual but obvious descent to the West. Just stay on the ridgeline between the drop-offs on either side.

Late Fall is best. During Spring you may be encountering run-off water in the approach canyons. During Winter there may be snow making some of the stretches on the ridgeline a bit treacherous. Remember, there are dramatic drop-offs on either side as you traverse the ridgeline, you’re pretty much in isolation and cell phone coverage is spotty. Summer and early Fall can bring temperatures approaching 100 degrees.

Take Hwy 160 from Las Vegas toward Pahrump. The highway ascends over a “hump” (the Potosi Mountain area). There’s a saying around here, “Over the hump to Pahrump”. Well, you’ve just traveled over that hump. Around 4-5 miles from the point where the highway begins to descend toward Pahrump there is a well-marked sign on the right for Lovell Canyon Road.

Locating the Intersection of Lovell Canyon Road and Saltgrass Road

Sighting the Right Approach Canyon, But Starting 1 Mile Below the Ideal Start Point

On this day, I could not locate the intersection of Lovell Canyon Road and Saltgrass Road, so I parked in a wide spot about a mile down the canyon and set my sites on what looked like a good approach canyon to the Rainbow Mountains Upper Crest Ridgeline. Turns out the approach canyon was the passage way to the Upper Crest Ridgeline at a point directly to the West of Mt. Wilson’s summit! However, I did not know that at the time. All I knew was that I was heading for a canyon between two high points to the East in the direction of the ridgeline. Parking a mile down Lovell Canyon Road from the ideal start point added 2 miles to the total round trip distance.

From 4WD Roads to ‘Ghost Roads’

For the first mile there were a series of 4WD roads heading toward the approach canyon. When it became clear that I was eventually on a road that paralleled Lovell Canyon Road to the East and looked like a powerline maintenance road, I knew I needed to take a right turn East toward the Upper Ridgeline approach canyon. There was a low ridgeline that headed toward the canyon, along with a wash to the right that looked like the wash emptying from the canyon. I turned off the powerline maintenance road onto that low ridgeline. As is usually the case, old paths and roads will appear on long ridgelines. This was the case here, as there was what I’ll call a “ghost road” which appeared and disappeared again and again along the low ridge approaching the canyon opening ahead to the East.

Eventually, as I neared the canyon opening, a section of the Upper Crest Ridgeline appeared ahead through the canyon. In addition, the ghost road intersected with a more substantial road that continued into the canyon opening. This turned out to be Saltgrass Road and I made a note to return to Lovell Canyon Road later by this road in order to discover the exact point it intersected with Lovell Canyon Road. This intersection point is clearly documented in the video and slide show on this page.

Salt Grass Road Continues as a Foot Path, Then All Paths Disappear

Soon, in the mouth of the approach canyon, there was a barrier to motorized vehicle traffic and Saltgrass Road continued as well graded foot path. The foot path ended about an 8th mile later as it descended into the canyon wash. It was pretty easy to keep sight of the Upper Crest Ridgeline ahead as I navigated the wash. A ghost path weaved in and above the wash, continuing for another half mile.

Eventually, it became clear that in order to continue toward the Upper Crest Ridgeline, I would need to ascend a fairly large ridge running perpendicular to the route I was on. All paths had disappeared by this point. At the summit of that ridge, another perpendicular ridge appeared ahead: Descent followed by re-ascent. While it consumes more energy going against the grain of the ridges, heading straight across 3 perpendicular ridges with their ascents and descents appeared the lesser evil. The alternate route would be to try to weave around the ridges in the washes below. So, my best advice is to head straight for the Upper Crest Ridgeline, ascending and descending the 3 intervening ridges. The descents and re-ascents between the ridges were not as difficult or long as they at first appeared.

Keep a Reference Point for Your Return Trip

You’re now in a place with no trails and you want to avoid going down the wrong canyon on the return trip. To help you get back to your starting point, there is a pretty distinct Mesa down on the far side of Lovell Canyon Road. This Mesa remains visible for most of this adventure, all the way to the summit of the Upper Crest Ridgeline. Heading toward the Mesa during the return trip will keep you on course getting back to your starting point.

The final approach to The Rainbow Mountains Upper Crest Ridgeline became visible once I topped the 3rd perpendicular ridge. In addition, a faint trail appeared, winding up the final approach ridge to the summit of the Upper Crest Ridgeline. The only footprints on this trail were big horn sheep, so it may not have been a human trail, but it worked!

At the Summit of the Upper Crest Ridgeline

As I topped the summit of the Upper Crest Ridgeline, there, immediately before me was the summit of Mt. Wilson in all its glory! To the right (South) was Indecision Peak, between the 2 peaks was First Creek Canyon and a little to the right of that canyon opening was Spring Mountain Ranch State Park, home of The Super Summer Theater! To the left (North) was the tip of Rainbow Mountain. In the distance ahead was Red Rock Canyon with Damsel Peak as in the immediate background, then Las Vegas Valley. Behind and to the Northwest was the Mt. Charleston Wilderness. To the South was Potosi Mountain. This was the perfect mid-point to explore The Rainbow Mountains Upper Crest Ridgeline!

Timing of This Adventure

Due to the additional mile on the approach and a lot of route finding, it took over 4 hours to reach The Rainbow Mountains Upper Crest Ridgeline from Lovell Canyon Road. The streamlined, downhill return trip took just 1 hour and 40 minutes! 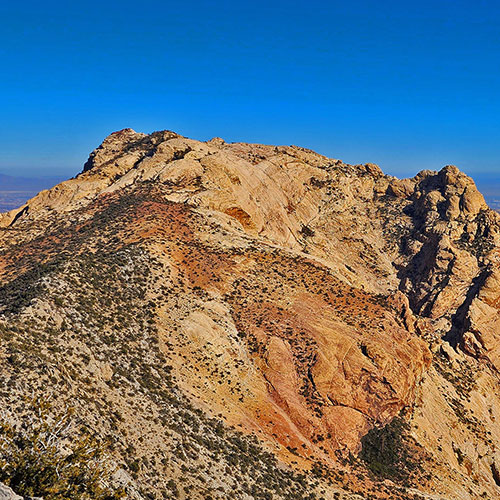