Anniversary Narrows in The Muddy Mountains Wilderness of Nevada is one of the most beautiful slot canyons in the state. If you’re into slot canyons, Anniversary Narrows is a must see no matter where you’re from. The intricate turns in the canyon along polished rock walls carved into millions of unique shapes lit up by a narrow slit 100s of feet above change in color with the advance of the sun throughout the day. It’s like wandering through a magical maze with a new, unexpected view beyond your wildest imagination around every turn.

False Warnings of Closure to the South Entrance of Anniversary Narrows

One site on the internet had posted red letter warnings that the traditional entrance to Anniversary Narrows slot canyon was blocked off and even guarded by the Oar Car Mining Company as late as February 2020.

Imagine a Grand Circuit of Anniversary Narrows and Bowl of Fire

Turns out that the main traditional entrance to Anniversary Narrows was not blocked off on this day, January 16, 2021, by the Oar Car Mining Company. In fact, it looked as if the mine had long been abandoned. There was actually a large sign with an invitation to the members of the Southern Nevada Gem & Mineral Society to explore the area and discover Lilac Agates, Christmas Agates, Petrified Algae, Bacon Agates and Travertine, then report back to the Society (see the slide show and video on this page). The sign noted that commercial digging is not allowed in the area. So, looks like Anniversary Narrows is not blocked off to hikers and runners and that mining operations are prohibited! The only people who seem to have any claim to the area are the Southern Nevada Gem & Mineral Society.

Still, the thought that the Southern entrance to Anniversary Narrows might have been blocked off inspired me explore a possible alternate Northern entrance to the Narrows, so in this adventure I do end up locating an unmarked trail North of the Narrows that leads to a spectacular aerial overlook of the Bowl of Fire. That viewpoint is the saddle just below Anniversary Peak.

Traditional Trailhead Directions – Thought to be blocked by a mining company…but perhaps not.

I’ve added in more detailed place name directions from my study of Google Satellite Images, along with the satellite image with directional drawing just to the left of the roads you will follow. 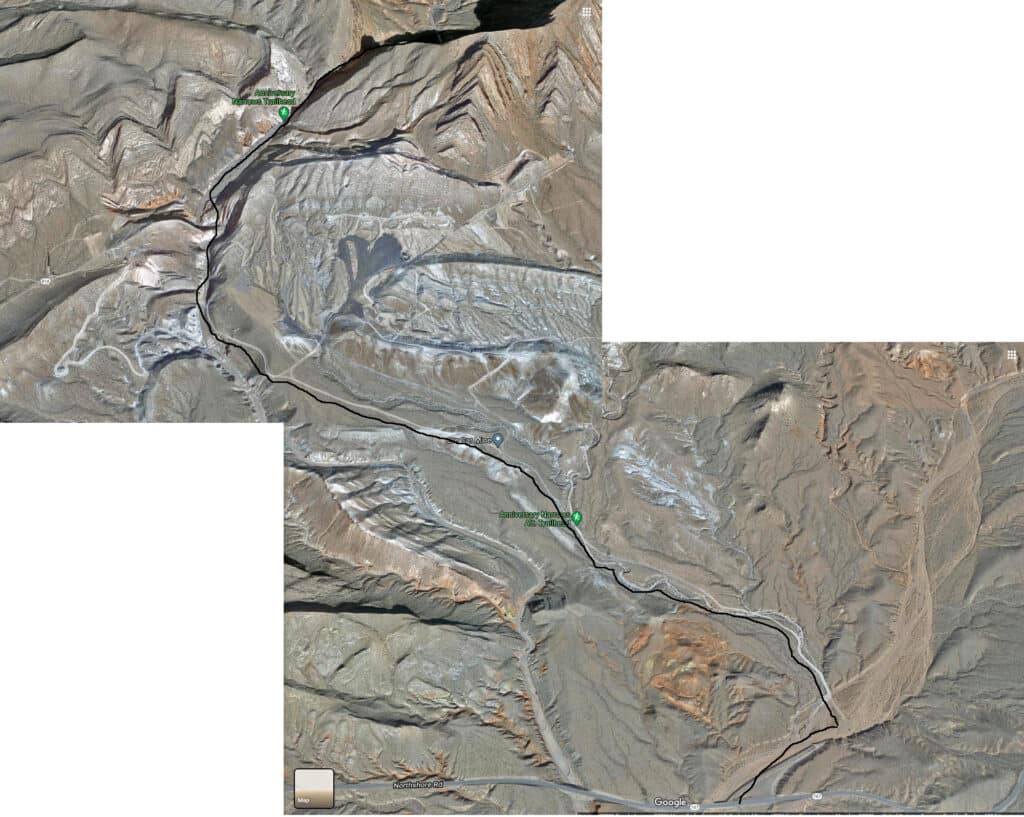 The first part of the wash is a couple hundred feet wide with a pretty flat gravelly surface broken up occasionally by smooth, low rock formations. There is an abandoned mine shaft about 1/8th of a mile up. The cliff walls on either side are a few hundred feet high. It’s a pretty rugged place, though navigation is easy.

Once you enter into Anniversary Narrows you’re in an intricate magical passage way at times narrowing to 10-15 feet wide sculpted by water that forced its way directly through a mountain. The walls towering 2-300 feet high around you are polished, looking almost like marble with varying shades of whites, browns and purples. Words really can’t describe the wonder of this place.

The surface is fairly easy to navigate, though there are a few marble-like smooth boulders forming barriers 4-6 feet high which must be carefully traversed. Some huge slabs scattered in places on the canyon floor serve as reminders of the rock fall that can occur during a rare earthquake or flood.

After about a mile of jaw-dropping amazement you’ll emerge from the Northern opening of Anniversary Narrows into a wider, more open upper wash. On this day I continued to navigate the series of upper washes staying to the right in hopes of reaching the Bowl of Fire. Eventually there was a cairn and trail that pointed up a pretty narrow wash. The cairns continued to guide me up a series of narrow washes. I stayed to the right unless the cairns pointed to a left branch, seeking to keep the high ridge to the right in view as that ridge looked like it might be the ridge bordering the West side of the Bowl of Fire (which turned out to be correct). Turns out that ridge is named Anniversary Ridge.

Ascending a Ridge to the Anniversary Ridge Saddle

Eventually the cairns ascended to the right, out of the narrow wash into a large open area where one could look back down toward the opening of Anniversary Narrows, and West and North to high points in the Muddy Mountains. To the East was that ridge I had used as a guiding point with the thought that the Bowl of Fire lie on the opposite side. There’s a spectacular view all the way back to the Northern opening of the Bowl of Fire about 2/3rds up the ridge trail to the Anniversary Ridge saddle.

Take a right on the saddle and the trail continues to the summit of Anniversary Ridge from which Lake Mead comes into view. I did not continue up to that point and do not know if it then descends into the South end of the Bowl of Fire. There does not seem to be a descent from the saddle into the Bowl of Fire. The rock walls are rather steep and the rock is loose.

Northern Entrance to the Bowl of Fire and Completing a Grand Loop? 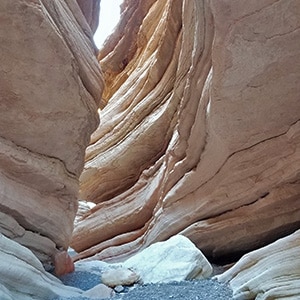