Keane Wonder Mine in Death Valley California is unique among the area gold mines and towns during the gold rush of the early 1900s.

Eureka Mine and the Ghost Town of Harrisburg

Rhyolite Ghost Town and its Montgomery Shoshone Mine

Skidoo Ghost Town and Mine

It’s not technically correct to refer to Keane Wonder Mine and others as a “mine” because in each case there are many small mines scattered around the hills in these areas, sometimes in the hundreds.

At least three main factors make Keane Wonder Mine unique among the others:

An additional factor adds to the importance of Keane Wonder Mine as a destination: Its accessibility. The Keane Wonder Mine is just 3 miles off one of the main roads in Death Valley only about 20 miles from Furnace Creek (see below) and the 3-mile unpaved access road is in fairly good condition for 2WD vehicle traffic.

From Las Vegas take Hwy 95 North to Beatty, Nevada. At Beatty Nevada take Hwy 394 (Daylight Pass Road) toward Death Valley National Park. About 10 miles after summiting Daylight Pass, take the left split toward Furnace Creek Ranch. In about 5 miles you will see a well-marked sign on the left for Keane Wonder Mine. There will be about 1 mile of unpaved road to get to Keane Wonder Mine.

From the parking area, head for the largest wooden structure just about 200ft East and at the base of the Funeral Mountains. This is the lower stamp mill where gold ore was processed. It’s also the site of the lower mining town. However, not much remains other than the stamp mill. There is an image of the stamp mill and mining town at their height in the slide show on this page. The best pictures of the stamp mill will be noon or later when it is lit up by the sun. Above the stamp mill you will see a line of aerial tram towers heading up the side of the mountain.

Notice that above the lower stamp mill there is a large cylindrical tank that held liquid — either water for the miners or cyanide to process the gold ore. I’m guessing it’s cyanide as it looks like other cyanide tanks in the region. As the trailhead to the upper stamp mill is unmarked and not clearly evident, just know that the trail will be heading up the tram tower ridge. The trail begins about 50ft below the cyanide tank, circles around to the left and below the tank then heads up the ridge upon which the tank stands. You’ll notice another trail that heads on South of the cyanide tank along the base of the Funeral Mountains. Even though this trail looks more well established, it’s not the trail that leads to the upper stamp mill and mining area.

If you turned right (upward) after crossing below the cyanide tank you will soon be rapidly rising as the trail becomes more evident and passes to the left (South) of some aerial tramway towers. Note the rocks on the trail that literally glow as they reflect the sunlight. These rocks are some kind of silvery metal. Also, take time to turn around as you pass the tramway towers and get some great pictures of the towers against the backdrop of the Panamint Mountains with Telescope Peak, Wildrose Peak and Aguereberry Point across Death Valley. These scenes will be the sharpest during the morning hours.

The path between the lower and upper stamp mill, while it rapidly rises over 1,000ft in just one mile, is very stable compared to the loose rock avalanche slope of Mummy Mountain in the Mt. Charleston Wilderness that has twice the incline and much less stability. As you ascend the Keane Wonder Mine pathway you’re mid-slope on the South slope of the huge canyon that ends in the wash at the lower stamp mill. The trail is wide enough and there is no exposure as long as you stay on the trail. You’ll also notice an old pipeline that ascends along side the trail toward the upper stamp mill and mining area. This is the pipeline that supplied the miners above with water. At regular intervals there are brief “U-shaped” variations in the pipeline, probably to help control the downward water pressure which must have been great in this mile-long 1,000ft vertical ascending pipe. The intent was to get the water to go uphill.

After about a mile and 1,000ft ascent you will see a second large wooden structure similar to the one below. This is the upper stamp mill where the gold ore was first processed before being sent down the aerial tramway that begins at the stamp mill. There is a short split-off trail that goes down to the stamp mill for a closer look. There is also a pully and gear structure up the hill just to the left (South) of the stamp mill. You’ll begin to see mine openings in this area, there are over 50 around and above the stamp mill. The openings are closed off and have warning signs that describe the dangers of entering an old mine. Two particularly interesting mines are one on the trail a few hundred feet below the upper stamp mill that still has an intact doorway opening and another just above and to the left of the stamp mill that has ore cart tracks protruding from the mine opening.

Continuing on past the upper stamp mill you will arrive at the remains of the upper mining camp. There are a couple piles of wooden boards that mark where structures once existed build to provide shade for the miners as Summer temperatures in the area can soar into the 120’s.

Exploring Further Up the Keane Wonder Mine Canyon

There are a number of mine shafts above the mining camp, but the trail up the side of the cliff becomes exposed and dangerous beyond a upper warning sign. On the other hand, there is a more established trail that continues up the main canyon. I continued up this trail for about a mile or so. It winds around, becomes pretty sketchy as it crosses over the canyon wash and eventually ends in a huge box canyon surrounded by 500ft towering walls. I think there are routes one can explore that might lead to the summit of the Funeral Mountains, but I stopped at the box canyon. There is a curious split-off trail that crosses over the canyon to the South (right) and looks as if there was once a bridge over the wash. I did not follow this trail, but there is likely another mine shaft around the corner.

Historic Timeline for the Keane Wonder Mine 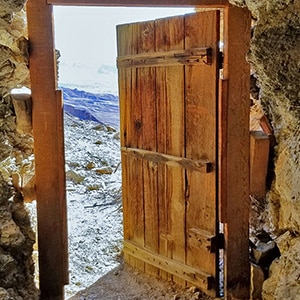