Little Red Rock is on private land owned by the Howard Hughes Corporation. Not being on protected public lands, there has been some vandalism of the red rock formations, the petroglyphs and in general, and there are a lot of 4WD and ATV trails crisscrossing the area.

Las Vegas Valley as a Backdrop

A unique feature of Little Red Rock is the view of Las Vegas as a back drop to the red rock formations.

All 3 of these approaches are at the upper ends of Las Vegas streets that may be extended into construction and residential areas in the future, potentially becoming barriers to Little Red Rock access.

Vast Network of Trails at the Upper End of Lake Mead Blvd.

Starting out at in a small parking area alongside the road near the current top of Lake Mead Blvd. (Western end in Summerlin), I was immediately impressed with the vast network of trails that began right at the end of Lake Mead Blvd. There were mountain bikers, runners and hikers. In addition, there is a network of 4WD/ATV roads that begins here. The only downside is that a lot of the land is privately owned and the leading edge of the wilderness area is largely under construction as Las Vegas expands outward. This means that whomever wishes to wander the land must at first navigate large construction projects and pass through private land. However, that is a thin wall that, once penetrated, leaves one an a huge wilderness to wander at will.

Main Reference Points for This Adventure

I began, using the high mountain ridge to the North (right) as a guiding line while setting my sites for Turtlehead Peak (the tip was visible) and the larger landmark Damsel Peak (aka Pincushion Peak). On the return trip I headed for a small hill at the lower end of the Northern ridge system, marking the upper end of Lake Mead Blvd. (see the slide show for this hill).

There were a number of use trails at the base of the ridge to the right. Curiously, the two most remarkable high point peaks on that ridge almost exactly mirrored the shape of La Madre and El Padre mountains. Interesting how geological formations repeat themselves again and again. This entire ridge bears exploration, and that will be a future adventure. If one were to continue along the Southern base of the ridge, one would eventually enter a canyon that would lead through the La Madre Mountains Wilderness and all the way over to Kyle Canyon and Kyle Canyon Road. The high ridges along the way promise spectacular views of the Las Vegas Valley and the wilderness area surrounding. I saw a  couple gaps in the ridge system that looked like possible passages to the Centennial Hills area.

However, today, after skirting the ridge for about a mile, I turned South toward Damsel Peak. The area between the Northern ridge and Damsel Peak contains the scattered ancient Jurassic era Aztec red rock formations that make up “Little Red Rock”. The red rock stands out brilliantly in the surrounding brownish desert environment. On this second Saturday in April the Yucca plants were in bloom creating a colorful foreground for photos of the red rock formations. Many other wildflowers were also showing their very brief Spring desert blooms.

Having begun my adventure at the end of Lake Mead Blvd. I was able to take in the majority of Red Rock formations between Lake Mead Blvd and Damsel Peak. Some of the initial red rock formations were not huge, but still impressive. In one of the isolated smaller formations I found what looked like an ancient cooking area and beside it some very distinctive petroglyph drawings (see the video and slide show on this page). I saw nothing like this in the larger “Little Red Rock” area at the base of Damsel Peak.

Basically, I meandered around going from one isolated red rock formation to another. Though I spent some time at each, I could return to explore a lot of missed areas. This entire collection of red rock formations could take days to fully explore, and each day would be filled with new discovery. There are also a number of challenging climbing opportunities. Always, I was headed for the base of Damsel Peak where I saw the small tip of a red rock formation.

Main Red Rock Formations at the Base of Damsel Peak

It turned out that small tip of red rock at the base of Damsel Peak was actually the main “Little Red Rock” area. It’s huge, with red rock cliffs that tower 150-200ft above a network of canyons that weave through the cliffs. I wandered from one end to the other and did see some more petroglyphs, some looked fake, others authentic (see the slide show and video on this page). Again, there is a lot more to explore than I was able to cover, but I’m glad I was on foot rather than being stuck on a 4WD road and just making a few stops to look around. You really need to wander through these red rock formations without worrying about where your vehicle was last parked.

4WD, Though Fun, May Limit Discovery and Create Exposure

Here’s one more limitation of having a 4WD vehicle. There are “Private Property” signs scattered along the 4WD roads with dire warnings about violators being prosecuted to the full extent of the law. Wandering on foot I pretty much blended in and was not a threat. In a large noisy vehicle that would not be the case. However, I did see a few pickup trucks and jeeps on this day and all seemed to be well. I think the main thing NOT to do in the area is camp, set up a makeshift nomad living space, build a fire, have a party, dump trash, leave bottles, cans, and broken glass or deface the beautiful red rock formations with spray paint graffiti. In addition, don’t injure yourself on the rocks. That would really make your trip obvious to all! If you leave no trace and just take a brief daytime adventure trip you MAY be okay. I was on this day.

In conclusion, Little Red Rock is a little known, largely untouched desert area that offers many discoveries, spectacular views, some climbing experiences, great pictures of red rock formations with the Las Vegas Valley and Strip as a backdrop (on a clear day), and beautiful solitude. Though I did see a few vehicles on the 4WD roads, I was mostly alone and saw not a soul while wandering the red rock formations. I expect that when I begin to explore and summit the Northern ridge system and the La Madre Mountains Wilderness between Lake Mead Blvd. and Kyle Canyon I will spend days without seeing a single person. We’ll see! 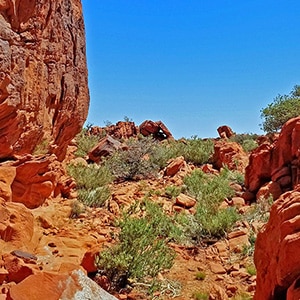