Golden Canyon in Death Valley is one of the most popular destinations to visitors of the valley. This is because of its unique beauty and easy accessibility. The entrance to Golden Canyon is only a few miles from Furnace Creek Ranch and The Inn at Death Valley along the well-traveled, paved Badwater Road. And the entrance to the canyon has a moderate sized parking area with additional parking along Badwater Road.

Within a few steps you find yourself in a beautiful canyon with high walls that instantly take you back in geological time. In places it’s clear even to this non-geologist where walls in the canyon were once horizontal, perhaps on an ancient lake bed, but over time were pushed upward to 45 degree angles. And you can see the separate layers of sediment that were once an ancient lake bed. Further up the canyon there are surrounding hills that almost glow with a golden color in the sunlight. Turn around and you can to see Death Valley and a portion of the Panamint Range perfectly framed in the canyon opening.

Further up the canyon as you ascend some of the surrounding golden hills spectacular views of Death Valley open up including Telescope, Bennett, Rogers and Wildrose Peaks and Aguereberry Point in the Panamint Range across the valley.

Golden Canyon is just a unique spectacular place to visit, and pretty easy to navigate with very few areas where you need to step over obstacles — at least until you near Red Cathedral at the upper end of the canyon. More on that later.

50 years ago I remember my parents driving the family on a loop road through Golden Canyon. You can still see remnants of that road in places. Today due to successive floods over the years the road is gone and Golden Canyon is only accessible by foot.

By the way, attempt this adventure only in late Spring through early Fall. Summer temperatures can easily rise in the area above 130 degrees!

As you enter Golden Canyon remember to turn around and look back to view Death Valley perfectly framed in the canyon opening. There is a sign at the canyon opening that indicates routes and distances. These are your main choices:

Loose Yourself in the Gentle Golden Hills. Explore!

In addition to the main trails mentioned above, you can loose yourself wandering around any of the golden hills in the area. It’s fairly hard to get lost. Just remember that when you want to find your way back to one of the main trails, be like water which flows downhill until it finds its way down into Death Valley. All downhill canyons lead to Death Valley. As long as you’re in the gentle golden hills and stay away from drop-offs you’re basically safe to explore. But once you get into rocky, cliffy sections all bets are off and its better if you have some rock climbing experience and equipment.

So much for the general lay of the land. Now here’s what you will see along the way. As you advance from Golden Canyon opening up the canyon you are between towering cliff walls on a wash that is generously wide: 20-30 feet or more. Watch for the geology that makes up the canyon walls. As mentioned above, in some places you will see evidence of formerly horizontal sediment layers pushed up to 45 degree angles. In other places the walls are solid rock. In still other places the walls are hardened composite (gravel washed down the canyon, hardened and then cut through by later floods until you have entire cliff walls of this solidified gravel rock).

Then, there are the gentle golden hills. They change throughout the day with the advancing sun, so if you traveled Golden Canyon one morning, you may get an entirely different experience passing through the canyon at mid-day or at sunset.

About a mile up Golden Canyon there’s a directional sign pointing up to Red Cathedral at the upper end of the canyon or Zabriskie Point and Gower Gulch Loop. Even if your destination is Zabriskie Point or Gower Gulch, take time to do the .5 mile trip up to Red Cathedral. It’s well worth it! There’s not only that fun final 200ft stretch below Red Cathedral where you’re scurrying through narrow openings, simultaneously climbing over obstacles while being careful not to bump your head on low overhangs. When you reach Red Cathedral itself you’re in a space surrounded on three sides by towering red rock cliffs, the walls of which are modeled into tall vertical shapes reminiscent of the huge pipes of a cathedral organ!

Take time to ascend the small path at the far end of Red Cathedral for an even better look at the Cathedral in addition to spectacular views of the Panamint Mountain Range of the West side of Death Valley.

Many Route Options on the Golden Hills Below Zabriskie Point

On this day, at the upper end of Badlands Loop I missed the sign to the final 1/4th mile pathway to the official Zabriskie Point Trailhead and instead circled below Zabriskie Point looking for the official way up to the Point. There are a number of good approaches up the golden hills below the Point, all marked with “Not A Trail” signs, but many people head up the hills directly to the Point anyway. I completely circled the base of Zabriskie Point and finally gave up and ascended a small wash to the far side of the Zabriskie Point. No problem, there are many good routes up the golden hills immediately below the Point. Once on the Point I looked around and discovered the actual trailhead down to Golden Canyon. It was at the upper right corner of the parking area.

I took the official trail downward. It’s wide, gently inclined and fast compared to the golden hills approaches. I headed back down to the Badlands Junction and took a left down the Gower Gulch Trail.

At first, on the Gower Gulch Trail, you’re in a very wide flat wash. I was running on the wash and, wouldn’t you know it, after ascending so many rocks and cliffs on previous mountain adventures with no mishap, I wiped out in wide flat Gower Gulch, tripping over some small stones! Isn’t it most likely that you’re in the “wipe out zone” just when you’re totally confident in the easy-to-navigate surroundings and drop your vigilance for a moment! Pulling myself together, I finally found my mobile phone on the rocks 15 feet away, miraculously undamaged. My skinned knee and left hand are still bandaged 3 days later!

Oh well, the wider, easy Gower Gulch begins to narrow in about a mile or so. Just before this point there is a curious cave in the golden hills above. I did not explore the cave on this day, not wanting to compound injuries. As Gower Gulch narrows, there are a few short class 3 scrambles downward. Not a problem. Just hang on to the sides and gently lower yourself. There are a lot of hand and foot holds in these few places.

At the lower opening of Gower Gulch, you naturally want to continue straight. There’s what looks like another easy but longer scramble downward. Don’t do it! This leads to a 30-40ft sheer cliff drop-off into the lower wash! Instead, take a hard right (North) and skirt the base of the hills for a little less than a mile back to the Golden Canyon Trailhead. Yes, you’re on the edge of that cliff drop-off for a few hundred feet at first, but the trail is wide enough and very easy to navigate.

In all, this adventure is fun, the views are spectacular and except for a few brief challenging spots the going is fairly easy, well-marked and hard to get lost even if you stray from the official route. One caution: Take a couple liters of water and attempt this adventure only between late Fall and early Spring. During the Summer months temperatures can easily rise toward 130 degrees and beyond! 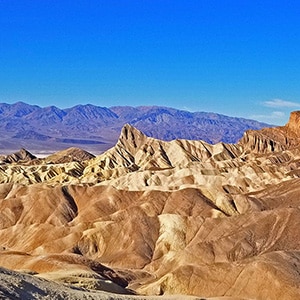 Article Name
Golden Canyon to Zabriskie Point | Death Valley National Park, California
Description
Golden Canyon in Death Valley is one of the most popular destinations to visitors of the valley. This is because of its unique beauty and easy accessibility. The entrance to Golden Canyon is only a few miles from Furnace Creek Ranch and The Inn at Death Valley.
Author
David Smith
Publisher Name
LasVegasAreaTrails.com
Publisher Logo