Once you rise along the approach ridge over about 8,500ft the wilderness assumes a beautiful, untouched alpine feel with various wildflowers, pine forests and eventually Bristlecone Pines. There are spectacular 360 degree views all along the approach ridge including the Sisters peaks, Charleston Peak, Lee Peak and Mummy Mountain along with the high ridgeline between, Angel Peak, the Northern part of the Las Vegas Valley, Gass Peak and the Sheep Range.

Initial Exploration to the Beginning of the SE Final Summit Approach

The best time of year to summit Macks Peak is in the later Spring or early Fall. On my first exploration the second weekend in June, the temperature in the Las Vegas Valley was 109 degrees! I was on foot from the intersection of Lee Canyon Road and Macks Canyon Road. It was around 80 degrees near Macks Peak summit and promising to rise further. By the time I returned to Lee Canyon Road it was about 90 degrees. I’d prefer a temperature in the Las Vegas Valley of 80-90 degrees for a good day to summit Macks Peak. In September or October you won’t have to deal with left-over Winter snow which could make the final approach ledge a bit unnerving. You’ll also have had the entire Summer to acclimatize yourself to altitudes 10,000ft and above.

Getting to Macks Canyon Road

Begin on Hwy 95 North from Las Vegas. Take a left onto the Lee Canyon Road turn-off. You’ll pass the Sawmill Trailhead. Be watching for the Macks Canyon unpaved road turn-off on your right. The sign will actually say, “Macks Canyon Group Camp”. If you reach the Deer Creek Road junction you’ve gone 1-2 miles too far.

On this day I parked at the intersection of Lee Canyon Road and Macks Canyon Road, then traveled the entire distance on foot. The 4-mile Macks Canyon Road is beautifully pine and juniper forested and rises to a high point with a spectacular overlook down Lee Canyon all the way to the Sheep Range and Gass Peak. All along the way there are numerous camping pullouts generous enough for a few vehicles and a large trailer. Some of these are perched on high points with incredible views. There are no services, so if you’re camping bring everything you need.

Additional Routes to the Eastern Ridge of Macks Canyon

Since I was on foot, I noticed at least 4-5 places where there was a branching trail or old road (now blocked to motorized vehicles) to the left. After seeing Macks Canyon from above, I believe these routes lead to the high ridgeline on the East side of Macks Canyon (pictured in the video and slide show on this page). This ridgeline looks like an adventure in itself. I’ll return at some point to explore!

It’s at the Upper Macks Canyon Group Camp that you have some alternate choices for the roughly 2.5-mile route to Macks Peak SE and NE Summits. There are basically main 3 approaches, but one could be creative and find multiple additional variations. All 3 variations are ways to get over the obvious ridgeline to the West (right side) of Macks Canyon Road that parallels the road.

This is not my favorite, but it works. I took this route on the return trip from Macks Peak just to check it out.

Near the top of the Macks Canyon Upper Group Camp, right where the turn-around loop begins in the road, take a right turn (SW) up an unmarked narrow gully wash. The gully is at first surprisingly simple, gradual and open almost without any obstacles. But after about 3/4ths mile it turns evil with a steep loose rock avalanche slope. This slope angles upward and a bit to the left to a ridge with will taper off a bit and finally rise up to adjoin the Northernmost of the main 2 summit approach ridges shortly before that main ridge reaches the final summit approach.

The 2 reasons I do not prefer this route are the steep avalanche slope and the lack of views.

I prefer this approach as it has only a couple brief sections of avalanche slope, is more gradual overall and the views all along the ridgeline are spectacular!

To catch this main approach ridge continue on Macks Canyon Road for about 1/2 mile beyond the Upper Macks Canyon Group Camp. Watch for a small obscure cairn of only a couple rocks at the base of the rather steep loose rock slope to your right. The slope is steep, but relatively short. Once you reach the ridgeline, angle left. You’re now on the main approach ridge to Macks Peak. There is a faint trail that alternately appears and disappears. Just stay on the ridgeline. Macks Peak will soon appear. Continue toward Macks Peak. This is the approach route I took in the video on this page; and SE Summit Approach #1 is the route I used to descend back to the Upper Macks Canyon Group Camp.

When you’re on main approach ridge #2, you’ll notice another main ridge to the South (your left) forming the other arm of the upsidedown “V” angling down from Macks Peak SE final summit approach cliff. If you had stayed on Macks Canyon Road about a half mile further from the point you headed up the main Northern approach ridge (above), you could have taken this alternate ridge to the South, but it appears to be a longer route and it doesn’t end up exactly at the SE summit approach…you have to circumvent the Macks Peak cliff base for a couple hundred feet to arrive at the upper end of main approach ridge #2, which you’ll probably at this point wish you had taken in the first place. That said, this Northern approach ridge looks interesting and beautiful as an alternate SE summit approach.

Though it seems impossible from a distance that there might be a summit approach along that imposing cliff face, when you get there, it’s actually a fairly wide ledge. There are some brief less wide exposed stretches along the ledge with a loose rock base, but these do not look too horrible. I’ll return on a cooler day, in better condition, to document the final summit approach. 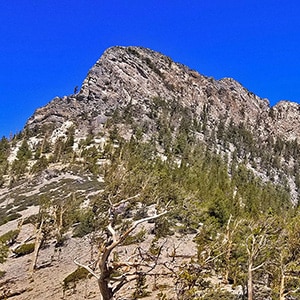