This adventure is a brief extension of the Mummy Mountain NNE adventure. Each adventure has a different focus. Mummy Mountain NNE focused on streamlining the wilderness route from Mummy Springs to the NNE area at the base of the Mummy Eastern cliffs. On the other hand, this adventure moves to the very edge of the NNE area where the only way forward is a pretty dramatic descent either to the Lee Canyon area or to potential routes allowing re-ascent of the Mummy Northern cliff area just below Mummy’s Head – more accurately, Mummy’s neck. The larger wilderness overlook is more apparent in the video on this page than the slide show.

In addition, this adventure also documents some of the amazing ancient Bristlecone Pine trees in the largely untouched Mummy Mountain Northern area. These can be see in the slide show on this page.

I began at the North Loop Trailhead in the Mt. Charleston Wilderness. See the Fletcher/Raintree page for more detailed trailhead location directions.

North Loop Trailhead to Delta Canyon (aka “The Fingers)

From the North Loop Trailhead proceed up the North Loop Trail passing the first plateau, the initial summit overlook where Kyle Canyon first comes into view, passing the Fletcher Peak cutoff trail, descending to Raintree and then taking a right to Mummy Springs. At the first switchback after Mummy Springs enter the wilderness and traverse 3 ridges and 3 wash canyons. I’ve named them: 1st Canyon, Cascade Canyon (due to the huge dry waterfall cliff there) and Delta Canyon (which has 3 washes shaped like an upsidedown river delta – some refer to this canyon as “The Fingers”). The Mummy Mountain NNE page and video more fully document the wilderness route between Mummy Springs and Delta Canyon.

The video on this page begins in Delta Canyon. Ascend the ridge at the far side of Delta Canyon. On this day I traversed this ridge at a lower elevation rather than angling up more rapidly to the Mummy Mountain Northeastern cliff area. There appeared to be a very faint ancient trail traversing the ridge at this elevation, but that is not certain. At any rate, the wilderness and the Bristlecone Pine forest here are almost entirely untouched and full of wonder. After a bit I began to slightly angle upward until I arrived at the very tip of the Mummy Mountain Northeastern cliff – actually a narrow ridge just East and below the true Eastern Cliffs. This is where the Northern wilderness of Mummy Mountain comes into view for the first time. There is a huge descent and re-ascent in order to potentially summit Mummy Mountain from this location.

So, I traveled a bit further along the ridge which appeared to descend toward Lee Canyon. There was a faint modern trail in this area that looked as if it started in Lee Canyon and ended at this point. I’ll check that out some day from Lee Canyon. The approach to this point from Lee Canyon would be much shorter, but from the looks of things, may involve some unpaved roads lower in the canyon. The ridge eventually became topped with a beautiful 20ft rocky ridgeline, before taking a more rapid descent toward Lee Canyon.

Rather than descending into Lee Canyon I turned around and traced the ridge upward to its highest elevation. What a grand and unique view of the entire Eastern side of Mummy Mountain! You’ll see this in the video.

My next adventure will be to ascend Mummy Mountain’s Western approach and then trace the summit ridge to the furthest Northern point and look for a potential descent. If successful, this will open a route from Mummy Mountain’s summit to Mummy’s Head, or alternately, to the termination point of today’s adventure where I might then traverse the wilderness to Mummy Springs and Raintree. If this works I will call this route The Grand Mummy Mountain Circuit. 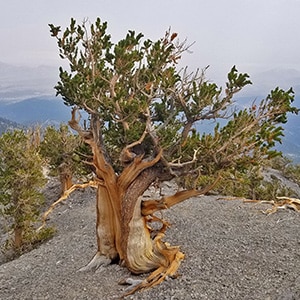