Location and View from Potosi Mountain

Potosi Mountain, Elevation 8,517ft, is the last high point along the horizon in the Spring Mountains as you’re viewing the skyline from Las Vegas. It’s the “hump” on highway 160 when you’re “going over the hump to Pahrump” from Las Vegas. From Potosi Mountain’s 8,517ft summit, populated with a number of communications towers, you can look across the entire stretch of the Rainbow Mountains including such mountains as Windy Mountain, Indecision Peak and the more familiar Mt. Wilson, Rainbow Mountain, Juniper Peak and Bridge Mountain which border Red Rock Park. Beyond that there is the Mt. Charleston Wilderness where you can see Charleston Peak, Griffith Peak and Mummy Mountain. Also visible are the La Madre Mountains Wilderness, the Sheep Range, Gass Peak, Lake Mead, Frenchman Mountain and a host of other landmarks. In short, Potosi Mountain is one of the most distinct landmarks and viewpoints in the Las Vegas area.

Before attempting this unmarked wilderness approach to Potosi Mountain you may want to take the easier Southern Approach to the Potosi Mountain Summit in order to scope out the area from above and become familiar with the points of reference.

There are numerous approaches to Potosi Mountain summit, each offering a totally unique adventure. Over time I will systematically document them all.

When you’re ready to attempt the Potosi Mountain Western approach, download the .pdf map from this page onto your phone so you have a reference in the event you lose phone coverage.

Take Nevada Road 161 (extension of Blue Diamond Road in Las Vegas) up to the top of the pass before it begins descending to Pahrump. Near the summit of the pass take a left onto Road 582 Mt. Potosi Canyon Road that should be signed for a Scout camp and Mt. Potosi Observatory. Download and enlarge the .pdf map on this page for greater detail.

Remain on the main Road 582 Mt. Potosi Canyon Road avoiding any of the numerous tributary roads. Very soon you will see a Private Property sign which announces No Parking or stopping for the next 2 miles. Continue these 2 miles on Potosi Canyon Road. Pass the Bronco Roadeo (which took over the former Boy Scouts camp), then the United Methodist Camp. Here you will enter the Spring Mountains Wilderness. The road will rise to a summit then begin to descend. After about one mile you will pass Potosi Camp (1/4th mile private stretch).

On the opposite side of Potosi Camp there is a huge hill which begins a ridge leading up to Potosi Mountain. There are a few wide spot parking areas just beyond the hill. This is where you park to ascend the ridge which arrives at a class 3 cliff approach to Potosi mountain. If you get to an A-Frame home, you’re at Potosi Spring and you’ve gone too far. Turn around and head back toward that huge hill and ridge to find the wide spot parking areas.

I’m working on a new milder approach that does not involve that final 700ft class 3 ascent to Potosi Mountain summit. It would go like this: You’ll notice the very distinctive cliff line that eventually descends to the Potosi Canyon Road area. At Potosi Spring (where that A-frame home is located) look for an ascent to the base of that cliff line. Then, summit the hill at the base of the cliff and skirt the top of the cliff all the way to Potosi mountain summit. According to the map this should be pretty much class 2, maybe a little class 3. No sudden 700ft ascent required.

Initial Exploration: Northern Base of Potosi Mountain Up to the Cliff Line

Scoping Out the Base of the Summit Cliffs

During this adventure, though I do not ascend to the summit, I scope out the Northwestern area of Potosi Mountain and discover a few alternate approaches. I explored the Northern Route #1 (above) and headed up toward the base of the summit cliffs.

I was on foot from where I parked at the intersection of Hwy 160 and Potosi Canyon Road. Yes, this involved about 6-8 additional miles on foot (out and back on Potosi Canyon Road). However, it gave me a unique opportunity to explore the base of the cliffs without having to worry about returning to a car.

Potosi Spring and the Historic Mine

I began by discovering the location of Potosi Spring about 4 miles down Potosi Canyon Road. There actually is a spring…a small stagnant pool of water with biting flies! It’s on the left side of Potosi Canyon Road. There’s an interpretive plaque there describing the history of the Potosi Mine located in the hills above. Miners took a sky tram to reach the mine location where they extracted iron, zinc and silver. See the video on this page for more detail. Curiously, taking Potosi Canyon Road on foot took only about 45 minutes. Driving takes about 15 minutes. The difference is only about 30 minutes!

I had thought to head down to the very base of the cliff line above, and then skirt the top of that cliff line all the way to Potosi Mountain summit (Western Route #2 above).

Instead, I headed back up Potosi Canyon Road to Western Route #1 and began ascending the ridgeline toward the base of the cliffs. I noticed other climbers ascending a gully below to reach the same destination. There is the ridgeline I ascended and a gully below which both ascend from the parking area on Potosi Canyon Road. Both get you to the base of the cliff. However, the higher ridgeline, I believe, offers a better view of the surroundings and the surface is rockier and firmer.

Exploration of the Hills Below the Potosi Mountain Summit Cliffs

Just before reaching the final cliff ascent, I turned back toward Potosi Canyon Road in order to scope out an alternative route to the cliff base that would approach this location from the summit of Potosi Canyon Road, saving about  500ft descent and re-ascent for those on foot. It turned out that the ridge systems between the base of the cliffs and the high point on Potosi Canyon Road required too much ascent and descent through intervening canyons. Therefore, if you’re taking Potosi Canyon Road on foot, you’re better off taking the road down to the Potosi Spring area and ascending to the cliffs from there and returning by the same route. However, I always find it fascinating to walk on ground that few travel. You see things few people see. 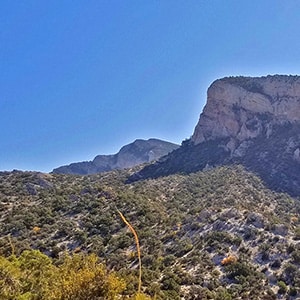 Article Name
Potosi Mountain | Northern Hills Exploration | Spring Mountains, Nevada
Description
During this adventure, though I do not ascend to the summit, I scope out the Northwestern area of Potosi Mountain and discover a few alternate summit approaches.
Author
David Smith
Publisher Name
LasVegasAreaTrails.com
Publisher Logo