Nature and Condition of the Historic Railroad Trail

The Historic Railroad Trail is about a 10-mile out and back adventure in the Lake Mead National Recreation Area in Nevada. This trail is a side trail branching off from the 31-mile River Mountains Loop Trail and spans the distance from the Lake Mead Visitor Center to Hoover Dam. You could combine this trail with a tour of Hoover Dam and a walk across the old memorial bridge. Ticket for Hoover Dam tours are available at the Hoover Dam visitor center.

The well-graded path, with it’s very gradual inclines and descents makes for an easy hike or run. The original grade was created by mule teams. You will likely see people of all ages on this trail from toddlers to seniors; from first time hikers to well-conditioned distance runners. It’s a great trail to begin your personal conditioning program with a spectacular view.

Purpose of The Historic Railroad: Transporting Materials and Equipment to Build Hoover Dam

The Historic Railroad Trail follows and old railroad bed, built in the early 1930’s, as a supply line for the construction of the Hoover Dam and is part of a 62-mile railroad system. Once trains ran 24 hours a day delivering nine million tons of sand and gravel to the Hoover Dam site along with the machinery and supplies necessary for the dam construction. 6 million cubic yards of concrete were produced at the Hoover Dam site and lowered several hundred feet in 20-ton buckets. Every load had to be emptied quickly before the cement hardened inside the bucket. To this day the concrete in Hoover Dam is still curing and hardening!

The railroad tracks were pulled up after the last trip in 1951 leaving a well-graded, wide path with 5 beautiful railroad tunnels carved out of solid basalt hills along the route. These tunnels were completed in just 5 months in 1931 by the Lewis Construction Company with crews working round the clock.

5 Tunnels Along the Historic Railroad Trail

You’ll notice timber construction in some of the tunnels, designed to prevent fractured rock from falling on rail cars and workers. A fire destroyed the original timbers in 1990. The National Park Service has stabilized three tunnels by restoring timbers and applying “shotcrete” to the calls and ceilings and on the rock faces of the portals.

Animal Life and Scenery Along the Historic Railroad Trail

Along the trail in this section of Mojave Desert, you might see bighorn sheep, coyotes desert tortoises, the Mojave collared lizard, horned lizards, speckled rattlesnakes, ground squirrels eagles and ravens along with spectacular wildflower displays and vivid sunsets sharpening the colors in the hills and lighting up Lake Mead and the mountains across the lake. You’re most likely to see wildlife around sunrise or sunset.

The Mexican Free-Tail Bat migrates to tunnels 1, 2 and 3 annually between May and early October. They migrate back to the warmer Mexican environment during the months from late Fall to early Spring.

Rock formations along the way, formed during the last 1.5 billion years include frozen Aztec sand dunes 250-300 million years old, metamorphic rock spewed from volcanic eruptions, solid basalt hills and sedimentary rocks once submerged beneath an ocean. The landscape is also affected by earthquakes, faulting and uplift. Hoodoos, pillars emerging from the tops of hills, are formed when a hard layer of rock, called a caprock, protects softer layers beneath from being eroded away.

The Muddy Mountains can be seen in the distance across Lake Mead, composed of limestones formed in a marine environment. Also, across the lake is the flat-topped Fortification Hill topped by a cap of black basalt from numerous lava flows 5 million years and older. The largest island visible is Saddle Island, composed of the oldest known metamorphic rock in Lake Mead National Recreation Area.

Interpretive displays along the trail bring out the story of the environment and its history. I’ve captured some of the information from the displays in this trail description.

Site of Ragtown Along the Historic Railroad Trail

Along the way you’ll pass the old site of Ragtown where 100s of construction workers and their families once braved the high heat of Summer and the roaring cold winds of Winter in wooden cabins, tattered tents and cardboard dwellings. They felt fortunate to have work during the Depression. There was no running water or electricity in Ragtown. While their husbands worked, wives and children hauled water from the river, washed their clothes and hung them out to dry on mesquite bushes.

Lake Mead and Hoover Dam Benefit to the Public

Lake Mead and Hoover Dam are part of the Bureau of Reclamation which delivers household water to over 31 million peoples, and irrigation water to 1 out of every 5 farmers in the West. The agency is the second-largest producer of hydroelectric power in the nation.

Vivid, descriptive warning signs at both ends of the trail caution against hiking this route between June and September when temperatures easily rise to 120 degrees threatening heat exhaustion and dehydration. During these months move your adventures up to higher elevations like The Mt. Charleston Wilderness. Actually, I would not hike the historic railroad trail between mid-April and late October.

Desert hiking tips at any altitude, but especially lower altitudes:

Take Hwy 93 South from Las Vegas. Hwy 93 becomes I-11. Take I-11 to exit #2 (Hoover Dam/Lake Mead Exit). There’s a turn-around at the bottom of exit #2. Cross under I-11, then take a left onto Hwy 93 toward Lake Mead (a right turn would take you to Hoover Dam). In a couple miles, turn right off of Hwy 93 onto Lakeshore Rd, pass the first right turn-off for the Lake Mead Visitor Center. Continue on Lakeshore Road and take the second right into the Historic Railroad Hiking Trail parking area. 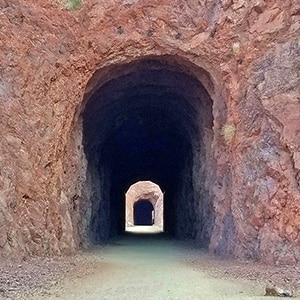 Article Name
Historic Railroad Trail | Lake Mead National Recreation Area, Nevada
Description
The Historic Railroad Trail is about a 10-mile out and back adventure in the Lake Mead National Recreation Area in Nevada. This trail is a side trail branching off from the 31-mile River Mountains Loop Trail and spans the distance from the Lake Mead Visitor Center to Hoover Dam.
Author
David Smith
Publisher Name
LasVegasAreaTrails.com
Publisher Logo