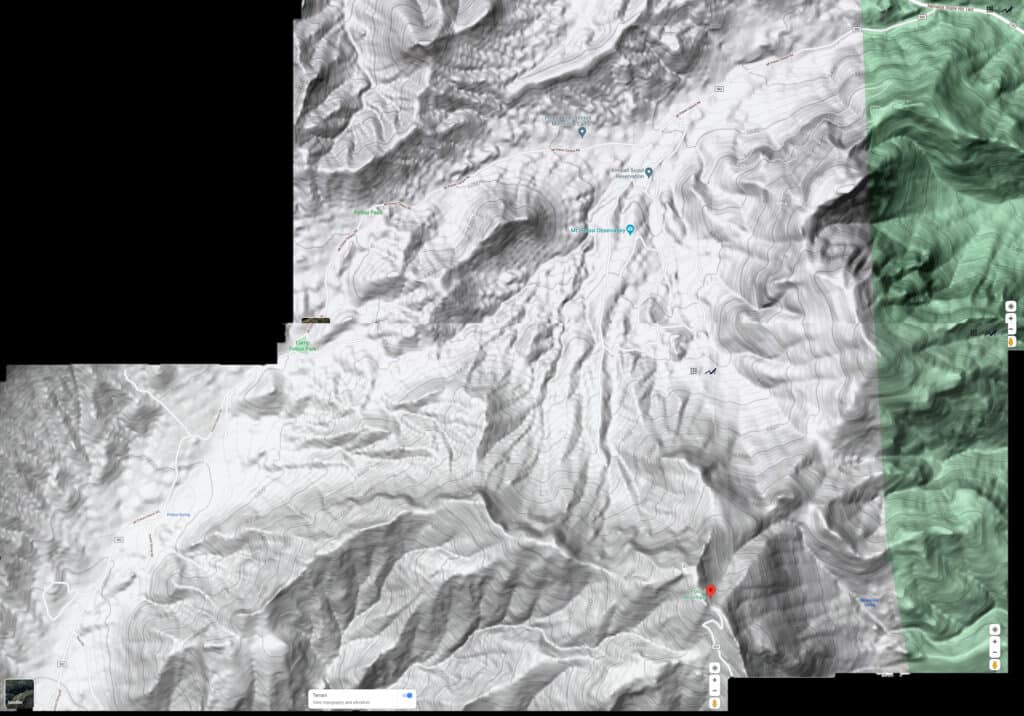 The Potosi Mt Western Cliffs Ridge is not only a spectacular route with views that do not end, but it is also a historical site, the location of Potosi Mine. This route discovers a nice trail beginning at the end of Potosi Springs Road and heading upward to the old route from the aerial tram site to the Potosi Mine. I believe wide, well constructed route between the high point of the tram and the mine was the route of the baby gauge railroad. Upon meeting the Potosi Mine route another very faint use trail continues up and along the Western Cliffs Ridge. That faint trail appears and disappears, but the ridge eventually leads to Potosi Mountain summit.

The ideal temperature for this adventure is when the high temperature in the Las Vegas Valley is around 80 degrees (Spring or Fall).

Views along the way include the Nopah Range Wilderness Area, Kingston Peak, the Mesquite Mountains and Clark Mountain to the West. Then the three Potosi Mountain summits with their communications towers come into view. Continuing upward views to the North and East begin to appear including the Mt. Charleston Wilderness, Sheep Range, Gass Peak, the Rainbow Mountains, Red Rock Park and the La Madre Mountains Wilderness. Near Potosi Mountain Summit the Las Vegas Valley, Frenchman Mountain, the Muddy Mountains and Lake Mead appear. At the summit additional views to the South begin to appear. In all, this route is a grand 360 degree panorama of Southern Nevada including points in California.

Also to be seen along the way are a number of potential summit routes as they top the cliff ridge originating from the Potosi Canyon Road area and head upward through openings in the cliffs. We’ll explore these on future adventures.

There is a Potosi Mine interpretive sign at Potosi Spring which reads:

“Originally located in April 1856, when a Paiute Indian showed Mormon miners where “heavy rock” could be found, the Potosi Mine is the oldest in southern Nevada.

Opened under the direction of Nathanial V. Jones, the Potosi Mine operated until January 1857, when the first effort ended. The lead was too brittle for bullets due to the high zinc and silver content. By 1861, the mine was being eworked by the Colorado Mining Company, but this also only lasted a few years.

With the early twentieth century mining boom in the Goodsprings area, the Potosi Mine was reopened. In 1913, the Empire Zinc Company bought the mine, building an aerial tram and baby gauge railroad to the site. By 1915, the Potosi mine was the largest zinc producer in Nevada, in addition to significant amounts of lead and silver. Production ended about 1930.”

Take Nevada Road 160 (extension of Blue Diamond Road in Las Vegas) up to the top of the pass before it begins descending to Pahrump. Near the summit of the pass take a left onto Road 582 Mt. Potosi Canyon Road that should be signed for a Scout camp and Mt. Potosi Observatory. Download and enlarge the .pdf map on this page for greater detail.

From Potosi Canyon Road to the Potosi West Trailhead

There is parking at the Potosi Spring area for rugged 2WD vehicles. There is a stagnant pond of water (Potosi Spring) and an interpretive sign there about the old Zinc mine, first Zinc mine in Nevada.

Potosi Spring Road branches off here from Mt. Potosi Canyon Road. If you have a good 4WD vehicle you can head up to the end of Potosi Spring Road. There is parking there for a few vehicles. This is where the adventure route description begins.

At the end of Potosi Spring Road you will see two shot up signs, one on each side of a small wash. Head for the shot up sign on the other side of the wash. Here begins a very nice trail I believe may once have been a mule trail used to transport equipment to the Potosi Mine. Watch carefully as you ascend because the trail can take turns you might miss if not observant.

Arrival at the Baby Gauge Railroad Route to the Potosi Mine

As the trail ascends it winds around the Western end of the cliff line, eventually reaching a termination at a very good stretch of road (I believe this is the baby gauge railroad route from the upper end of the sky tram to the Potosi Mine). All signs of the railroad track are gone, but it appears the track was once here.

Of course, there is another shot up sign at this point. You have some choices here. You can:

Curiously, from below in the Potosi Spring area the Western cliff line  appears like a pretty straight line ascent to the summit. But when you’re navigating the upper cliff line, the series of high bluffs turn this experience into something far more rugged than a steady straight line ascent. As you round each bluff, the next bluff appears.

On this day I continued up the cliff Western ridge. There is a very faint use trail that appears and disappears. However, you want to continue upward to the bluff above and skirt the headwall cliff to the left. Immediately below the headwall cliff a pretty nice trail will appear and guide you around the left (North) side of that first bluff. As you round the bluff Potosi Mountain summit will appear in the distance.

I navigated around the upper right (South) of the third bluff hugging the base of the head wall. About half way around that bluff there is a large covered area in the cliff wall that would make an awesome camping area to spend a night with spectacular views.

On both sides of the third bluff there is what looks like the location where climbing routes ascending from the Potosi Spring area emerge onto the upper cliff line.  On the West (near) side of the third bluff there appears to be the point where an ascent route originating above and slightly to the left (East) of Potosi Spring reaches the summit of the cliff line. At the far side (East) of the third bluff,  I could look almost straight down to the approach ridge I earlier took to the Potosi North Trail. This is where the summit route that originates just to the West of that ridge passes through an opening in the cliff line. There is clear evidence of use trails ascending from below and reaching the summit of the cliff line on both sides of this third bluff. I’ll check these out on future adventures.

I estimate, based on the remaining elevation gain to the summit and the bluffs ahead that a complete round trip to Potosi Mountain summit from the intersection of Hwy 160 and Mt. Potosi Canyon Road would be about 10 hours on foot and about 7 1/2 hours utilizing a 4WD vehicle on Potosi Canyon and Potosi Spring Roads. This does not include stops for pictures, videos and rest. This is based on 2 more hours to the summit and 1hr 15 minutes back to the high point at the Eastern edge of the 3rd bluff where my adventure ended on this day. 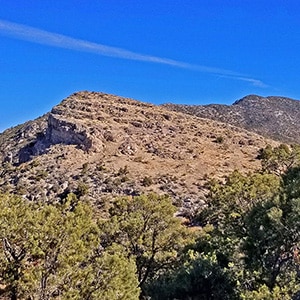