Gold Still to be Found in Death Valley

Gold in an Unlikely Location in Death Valley

But there’s another location for gold in Death Valley, and if you’ve visited Death Valley, you’ve probably walked right over it many times. I’m talking about the Mesquite Sand Dunes just a mile East of the village of Stovepipe Wells.

However, as any prospector knows, you have to put in some work to find the gold. The Mesquite Sand Dunes turn every shade of color from white to golden during the hours of sunrise and sunset. But to witness the best display, you’ll need to wander into or out of the midst of the Mesquite Dunes in the dark, either before sunrise or after sunset. And during the time of pitch darkness, you’re either going to risk meeting up with a sidewinder rattlesnake during the warmer months from mid Spring through mid Fall, or getting very cold during the colder months from mid Fall through mid Spring.

Spectacular Shades of Color from Crimson Red to Gold

From your great perspective in the midst of Death Valley’s Mesquite Sand Dunes you’ll not only see the dunes turn golden, but also see the surrounding mountain ranges go from being a sharp black silhouette to every shade of orange and crimson red. The sun rises over the Black Mountains and reflects the colors best over the Cottonwood, Last Chance, Grapevine and Funeral Mountains to the North, West and East of the Mesquite Dunes.

Your plans to take in the Mesquite Dunes in the sunrise or sunset hours will be rewarded with a rare discovery of gold in Death Valley.

Where to go from the Mesquite Dunes parking area? There are no trails, and you’re beginning or ending in near complete darkness, except during full moon nights, which will reward you with an even rarer display. Though there is no trail, you can pretty much wander freely through the dunes without fearing a dangerous fall off a ledge onto the rocks below as is the case pretty much everywhere in the mountains surrounding Death Valley. In this case, there are pretty much only soft landings on the gentle Mesquite Dunes. However, there is the one exception of sidewinder rattlesnakes during the warmer evens and nights of the year.

Prepare to Navigate the Dunes in Darkness

I suggest scoping out the Mesquite Dunes during the light of day so that you can get the general lay of the land before entering it in darkness. What to watch for is the highest dune about a mile from the parking area. This is a great place to capture some of the best 360-degree views during sunrise and sunset.  If you know generally where that dune stands in relation to the parking area, it’s not difficult to navigate to and from the high dune in total darkness. Of course, you could use a head lamp. However, I think a headlamp sort of ruins the total visual experience because with a head lamp your focus is on the area right in front of you that is lit up by the lamp. On the other hand, without a head lamp the entire universe opens up as you navigate by the light of the stars!

The Highest Dune May Offer the Best Perspective

Another factor to note is that the most traveled portion of the dunes will be to the South and West of the high dune. I think it adds to the picture to see footprints on the dunes. However, if you want to get that fresh, windswept remote wilderness look with no footprints, you need to head for the area to the North and East of the high dune. Your choice, and with careful planning you can take in both types of scenes.

Still another consideration is camera equipment. On this day I took my humble mobile phone. It does have a good high definition camera. On the other hand, if you’re a serious photographer looking for that Pulitzer Prize-winning shot, you’ll want to haul some heavier equipment into the dunes. Yes, you’ll capture a few more spectacular images, but you may sacrifice the mobility of moving rapidly from place to place to sample the dunes from multiple perspectives. By the way, time lapse photography equipment could create some incredible images. It’s a trade-off whether to haul heavy expensive equipment into the dunes or whether to travel light. And this brings to mind another consideration when navigating the dunes: Wind.

The Consideration of Wind in the Dunes

The dunes were formed by the action of the wind carving solid rock throughout Death Valley. The dunes are located in one of those places where everything settles that has been stirred up by the wind. You may have a spot like that in your back yard. On high wind days, the wind-driven sand that cuts through and carves solid rock will be cutting away at you — getting into your eyes, your nose and into every piece of valuable photography equipment you take into the dunes. Sand penetrates everywhere. So, be aware of the wind forecast! Fortunately, most days during the sunrise and sunset hours are relatively calm in the Mesquite Dunes and you’re most likely to see and photograph rare visions of gold there in the heart of Death Valley! 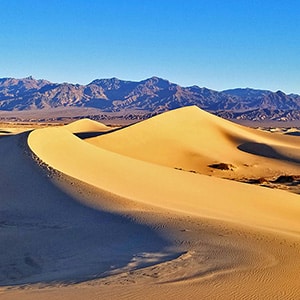 Article Name
Mesquite Dunes at Sunrise | Death Valley National Park, California
Description
The Mesquite Sand Dunes turn every shade of color from white to golden during the hours of sunrise and sunset. But to witness the best display, you’ll need to wander into or out of the midst of the Mesquite Dunes in the dark, either before sunrise or after sunset.
Author
David Smith
Publisher Name
LasVegasAreaTrails.com
Publisher Logo