Rapid Metropolitan Growth in Clark County During the 2nd Decade of 2000.

Las Vegas is one of the most rapidly growing population areas in the U.S. as of January, 2021. Clark county was rated as the 2nd of the top 10 U.S. counties in numeric growth (2017-2018) according to Census.gov and our rate of growth has only increased.

The Challenge: Growth with Respect for Nature

This rare proximity of a growing metropolitan area with surrounding rare and beautiful wilderness areas presents a challenge: How can the metropolitan area continue to grow and expand while respecting and preserving the wilderness areas? Some might object to metropolitan growth. However, those who object are living in homes and neighborhoods which were once pristine and natural. It doesn’t seem right to say, “We’re in our homes…now close this opportunity off to all others.”

On the other hand, metropolitan growth simply pushes the border outward indiscriminately destroying nature cannot create an optimal living situation for our descendants. There must be a middle ground.

That middle ground may be metropolitan growth with respect for the environment. Policies might include preserving untouched natural areas so that every neighborhood has close access to parks and areas of open space. A second principle might be respecting the limits where the current natural areas named above begin and leaving a boundary between the metropolitan areas and the wilderness areas.

In the video and slide show on this page I take a mountain bike along the Northern growth edge of Las Vegas between Durango Rd and Highway 95. Let this serve as a snapshot in time: January 3, 2021. I’ll return to this same area 9 years from now in January of 2030. At that time we’ll see how the rapid metropolitan growth has affected the current pristine desert areas on North of the Northern growth edge of Las Vegas. The hope is growth, with respect for the environment.

Our adventure begins in the Silverstone Estates residential community currently on the very Northern growth edge between Rainbow Blvd and Silverstone Ranch Drive (Northern extention of Buffalo Drive). To the immediate North is wide open desert, then the Desert National Wildlife Reserve boundary including Gass Peak and the Sheep Range areas.

We travel through an abandoned 27 hole golf course in the Silverstone Estates. The golf course, over the past 5 or more years has reverted to nature. It’s a huge area under a seemingly endless litigation between the owner and the community. What will it look like 9 years from now? We’ll see. Hopefully the residents will preserve this area, or the larger part of this area, as open space.

We head down Silverstone Ranch Drive and take a right on Rachel. Within a couple blocks there is a relatively untouched open area to the North with extensive trails for hiking, running and biking. This great open area is adjacent to Floyd Lamb Park where there are 4 lakes fed by Tule Springs and a beautiful park area with picnicking, fishing and more trails.

Our next turn is a right onto Durango Drive where we continue to the current end of Durango Drive at Moccasin where Tule Springs Fossil Beds is located, another natural area.

Moccasin from Durango Drive to Highway 95

Turning left onto Moccasin we’re now skirting the very Northern growth edge of Las Vegas as we head toward Hwy 95. The road is unpaved with a lot of construction activity. To the right is wide open desert area. To the left is some open area being filled in with new housing developments, the current large development being the Sunstone Community. It’s clear that by 2030 everything to the left (or South) of Moccasin will be completely filled in as residential and commercial.

Next Snapshot: January of 2030

The unknown is what will things look like to the right and North of Moccasin by 2030? This point is only a mile or so from the border of the Desert National Wildlife Refuge, largest wildlife refuge in the lower 48 states. Hopefully this border will be respected. We’ll take another snapshot of the area in January of 2030.

By the way, I also took a snapshot a few weeks ago of the Northern Growth edge traveling East from Durrango to Rainbow. See the Lunatics’ Lickety Split Loop page. 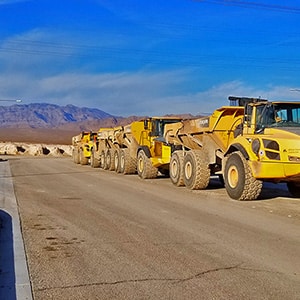 Article Name
Las Vegas Northern Growth Edge 2021
Description
Las Vegas is one of the most rapidly growing population areas in the U.S. as of January, 2021. Clark county was rated as the 2nd of the top 10 U.S. counties in numeric growth (2017-2018) according to Census.gov and our rate of growth has only increased. View this video snapshot in time of the Northern growth edge of Las Vegas in 2021.
Author
David Smith
Publisher Name
LasVegasAreaTrails.com
Publisher Logo