Loop Trail Circling the Base of Cheyenne Mountain

The Toove Trail, a 4-mile loop trail, completely circles the base of Cheyenne Mountain. The Toove Trail is child-friendly and used by hikers, trail runners, mountain bikers, rock climbers scoping out summit approaches, people walking their dogs and families with children. If you can walk 4 miles, you can probably handle the Toove Trail.

Las Vegas Parks at the Base of Cheyenne Mountain

The East side of Cheyenne Mountain is bordered by Cliff Shadows Parkway, and there are three Las Vegas Metro Area Parks along the road: Buckskin Park (just above – North of – I-215 Cheyenne Road exit), Trigono Hills Park, about 1/4th mile further up Cliff Shadows Parkway and, in about one more mile, Open Desert Park (take a left – West – off Cliff Shadows Parkway onto Alexander Road and continue about 1/8th mile to the end of that road). All of these parks serve as access points for the Toove Trail.

As you circle Cheyenne Mountain on the Toove Trail, you’ll notice potential summit approaches from class 3 to class 5 climbing skill levels (class 3 – you need to use your hands; class 5 – sheer cliff, ropes recommended).

The summit itself is a 1.5-mile-long slope with a 900ft altitude gain from its North end near Open Desert Park to its high summit South end at Buckskin Park. The summit ridge is rather rocky and narrow in places. I refer to it as The Razor’s Edge.

It’s advised to explore Cheyenne Mountain from Fall to Spring or very early on a Summer morning as mid-day Summer temperatures can easily rise above 110 degrees.

Take I-215 North from Summerlin toward Centennial Hills. Exit at Cheyenne Ave. Turn left to cross over the freeway. Just beyond the freeway the name of the road changes to Cliff Shadows Parkway. Take the first left into Buckskin Park. It’s not well marked so you could easily miss it. It’s more a trailhead parking area than a park, and much of it is unpaved, so just look for a moderate sized parking area on your left almost immediately after crossing over highway 215.

On this day my plan was to begin at Buckskin Park,  completely circle the base of Cheyenne Mountain and ascend to the summit ridge.

The Valley West of Cheyenne Mountain

Rounding the Southwest corner of the base of Cheyenne Mountain the view opens up to a Western valley crisscrossed with trails and a higher ridgeline on the opposite side. That high ridgeline is Summerlin Ridge with Summerlin Peak. The reason I mention these here is that the Toove Trail and Cheyenne Mountain ridge give an excellent perspective for scoping out potential summit approaches on the Eastern side of Summerlin Ridge.

Scoping Out the East Side of Summerlin Ridge

The West side of Summerlin Ridge, accessed from the upper end of Lake Mead Blvd., is mostly guarded by sheer cliffs which are curiously shaped like smaller versions of La Madre Mountain, El Padre Mountain and Burnt Peak, thus my nickname for these features: Little La Madre, Little El Padre and Little Burnt Peak. The slope along the East side of Summerlin Ridge, viewed from the Toove Trail, is more gradual than the cliffs on the West side, so on this day I noticed a number of potential Eastern approaches to the summit area of Summerlin Ridge (see the video and slide show on this page).

Summit Ridge Approaches on the West Side of Cheyenne Mountain

Continuing around the West side of Cheyenne Mountain, though there were mostly cliffs, I noticed a couple potential class 3 approaches to the summit of the Cheyenne Mountain ridgeline. As I neared the Northwestern edge of Cheyenne Mountain, there was a fairly well-traveled split-off trail that headed for the summit ridge. I took this trail, winding my way up to the summit ridge. At the base of the ridge in a cliffy area, there was a small overhang camping area which looked like a great place to spend an evening watching the sunset and the stars as night deepened.

The summit of Cheyenne Mountain Ridge is rocky and narrow in places. There is a high point on the mid-summit ridge with a summit box. From there one can see another quarter mile of ridge continuing South to the higher Southern summit. That section of ridge is very narrow in places with some exposure.

Descending the Slope to Trigono Park and Return to Buckskin Park 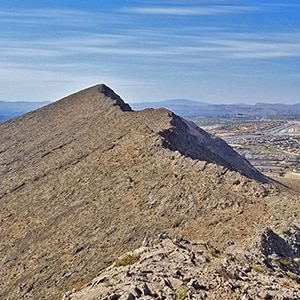