The Northern Bowl of Fire is a massive Aztec red rock cliff system rivaling any other red rock formation in Nevada. The red rock is composed of frozen sand dunes from the Jurassic era, and the red coloring is caused by iron that leached up through the sand before it solidified into rock. The route I describe here offers spectacular 360 degree views of the Overton Arm of Lake Mead, the Hamblin Mountain area, portions of Lake Mead, the Southern Bowl of Fire, Anniversary Ridge, and the Muddy Mountains. Due to the lower elevation I suggest you experience this adventure in the late Fall through the early Spring. During the Summer, temperatures can exceed 120 degrees.

From the Northshore Summit Trail parking area at mile 20 on Northshore Road head up to Northshore summit. The trail does have a higher, grander view but there is a trade-off in that it is more exposed to the wind and on the windy day I made this trip it was hard to keep my hat from becoming airborne and soaring impossibly far away.

The Northshore Summit is only about 1/2 mile and offers a spectacular view in all directions including the Northern Bowl of Fire and Muddy Mountains to the West, a huge rugged canyon immediately below to the South and beyond a glimpse of Lake Mead, the Hamblin Mountain area to the East and the Overton Arm of Lake Mead to the North. Northshore summit is in itself a great very brief out and back 1 mile round trip.

From Northshore Summit continue along the summit ridge to the West. There is a pretty distinct trail. The ruggedness of the canyon immediately below to the left (South) is spectacular as are the Aztec red rock formations. In places it’s like a scene from Monument Valley.

The ridge continues to wind around a bit to the right, then descend after another half mile into what I’ll call the “badlands” stretch of this adventure. You’re descending and winding through a series of canyon washes. Continue downward as the washes wind more to the West and eventually empty out onto an unpaved, ungraded road. Remember where you emerged onto that road because you’ll need to find that exact spot on your return trip.

Take a left and continue down the unpaved road for about 1/8th to 1/4th mile until it intersects with a more established, graded unpaved road. This is the road leading down to the left eventually to Northshore Road Mile 16 which is the main jumping off point for Anniversary Narrows and also an alternate approach to both the Southern and Northern Bowl of Fire. Were you to take a right on this unpaved road you’re heading up a main artery road into the Muddy Mountains Wilderness.

However, to continue toward the Northern Bowl of Fire take a left on this main artery unpaved road, then, within a few hundred feet be looking for a way to ascend the ridge to your right (West) toward the Northern Bowl of Fire. There is actually a very faint trail, if you could call it a trail, that ascends that ridge about 200ft from the intersection.

Ascend the ridge to a plateau that gives you a direct view toward the Northern Bowl of Fire. About a mile to the West there is another ridge system and you can see 2 saddles/passes in that ridge that provide passage to the Northern Bowl of Fire. On this day I made a bee-line for the Southern of the 2 saddles. There is a bit of navigating a couple intervening washes, but no real difficulty arriving at the saddle.

Look for a way to ascend these mounds toward the general direction of the Northern Bowl of Fire cliffs so you can see the larger picture of where you are. Once you ascend the red mounds, simply head toward the cliffs. As you reach the cliff system it looks as if there are a few entrance canyons in the midst of the cliffs and a way to circle around the South and the North side of the cliffs.

On this day I turned North at the base of the cliffs and skirted the cliff base to its Northern edge. There are canyons and ridges that permit an approach to the very Northern edge of the cliffs, however in places you do need to do a bit of scrambling. Just pick gradual incline/declines vs. exposing yourself to a potentially dangerous drop-off.

Circling from the Northern Edge of the Northern Bowl of Fire to an Entrance Pass in Lake Mead National Recreation Area, Nevada

At the very Northern edge of the cliffs it looks as if you could circle around the back side of the cliffs, potentially circling around the entire cliff system? And there are additional red rock formations further to the East. Many additional adventures.

However, on this day at the Northern edge of the cliffs I began to circle around back to the East toward the pass in the ridge system I had used to enter the Northern Bowl of Fire. There is an additional higher pass to the North of the pass I had entered originally. I made my way through that higher pass. As I topped the ridge I could see my entire route back East to the Northshore Summit and Northshore Road. I headed directly through the desert valley to where I expected the main unpaved road to be, descended to that road, turned left for a couple hundred feet, then right onto the smaller ungraded dirt road. Ascended that smaller road for about 1/4th to 1/2th mile, took a right and angled back through the bad lands canyon wash system, ascended to Northshore Summit and back down to the parking area. 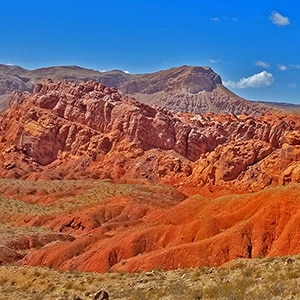