These are among my first recorded videos on LasVegasAreaTrails.com, and this route one of my early favorites due to its wild nature and amazing views along the top of the Rainbow Mountains Upper Crest Ridgeline above the West side of Red Rock Park.

The summit of North Peak is like the turret of a medieval European castle with amazing views in one direction of Red Rock Canyon and Calico Basin including the Calico Hills Keystone Thrust cliff area, La Madre Mountain, Turtlehead Peak, Damsel Peak, Bridge Mountain, Rainbow Mountain and Mt. Wilson. In the other direction one can see Griffith Peak and the Southern edge of the Mt. Charleston Wilderness. The last 50ft ascending the rock wall to that North Peak turret is a fun little puzzle to figure out the best route.

Getting to the Trailhead at Willow Springs Picnic Area

There is a close and a more distant trailhead to North Peak. The closer trailhead is at the top of Rocky Gap Road with a trail covering a short distance of a couple miles. You’ll need a 4-Wheel-Drive vehicle to get to this trailhead as Rocky Gap Road is extremely rough in places and I’ve run past more than one stalled 4wd vehicle on this stretch. The longer route involves starting at the Willow Springs picnic area in Red Rock Park and ascending Rocky Gap Road on foot. At any rate, the Willow Springs picnic area is a couple miles beyond the highest viewpoint on the main scenic loop road in Red Rock Park. Take a right turn off the Red Rock Park Scenic Loop Road and proceed to the picnic area at the end of the paved road.

While at the Willow Springs picnic area take time to explore a bit. I understand there are petroglyphs and other signs of ancient native American habitation including agave roasting pits. Begin ascending the unpaved Rocky Gap Road at the Willow Springs picnic area. In about 1/2 mile continue on past the turn-off to the right that takes the Willow Springs Loop around White Rock Mountain. That turnoff also takes you to La Madre Springs and ultimately up to La Madre Mountain via the Western approach. But you’re not taking that today. You’re continuing up Rocky Gap road.

In about 2 miles there’s a turn-off parking area and small cairn on Rocky Gap Road. You’ll see a ridge system to your left which is the beautiful Rainbow Mountains Upper Crest Ridgeline. There’s a ridge that ascends to the top of the Rainbow Mountains Upper Crest Ridgeline accessed from the cairn marker. The route is a bit touch and go with a trail appearing and then disappearing in places. At times the trail is very distinct, but as you rise up the ridge and reach the Red Rock area the boulders pretty much obscure the route.

The best strategy is to stay on the ascent ridge and go for the most logical route to the summit of the Rainbow Mountains Upper Crest Ridgeline. The ascent is pretty rapid and very soon you look down and Rocky Gap Road seems like a little toy road. Griffith Peak in the Mt. Charleston Wilderness begins to emerge behind you.

Once you reach the Red Rock area on this approach ridge there’s a kind of barrier bluff that you can circumvent to the left or the right. I usually choose the left route. Note that the red rock slabs at the base of this bluff are very slick when wet, and a 45 degree ice rink when icy!

After ascending and descending a few high points, in a couple miles you will reach a high point you cannot ascend without climbing a class 3-4 rock formation. This is North Peak. Skirt around the left side of the peak, then just before passing it take a sharp right and ascend the rocks to the summit of the peak. As mentioned, the view is amazing from the small turret-like area at the top!

I sometimes descend from North Peak about 1-2 miles to its Rocky Gap Road trailhead and then run Rocky Gap Road back to the Willow Springs picnic area. The descent trail to Rocky Gap Road is only about 1/8th mile beyond North Peak. It’s clearly marked. Alternately you could continue straight along the Rainbow Mountains Upper Crest Ridgeline and on to the access trail to Bridge Mountain. You could even continue along the Rainbow Mountains Upper Crest Ridgeline all the way to its Southern access point at Mountain Springs Trailhead on Hwy 160 at the base of Potosi Mountain.

Additional multi-day adventures could include a crossover to the Wilson Ridge and ascent along that ridge all the way to Harris Mountain Summit, then down Harris Mountain saddle to Griffith Peak Summit, finally descending to the Lovell Canyon Trailhead via Sexton Ridge. Or, from Griffith Peak Summit one could take the Charleston Loop to Charleston Peak, Lee Peak, Mummy Mountain, Fletcher Peak and finally down to the Trail Canyon Trailhead in Kyle Canyon. Everything is connected in this vast wilderness area just outside Las Vegas. You could loose yourself here for days on end!

As you may have guessed, it’s possible to ascend Rocky Gap Road from its origin at the Willow Springs picnic area and stay on the road for about 5-7 miles to its summit, where there’s a trailhead to North Peak and Bridge Mountain. North Peak would only be about 1-2 miles from that upper trailhead. If you decide to 4wd Rocky Gap Road have a very rugged vehicle and don’t be too concerned about banging it up a bit. 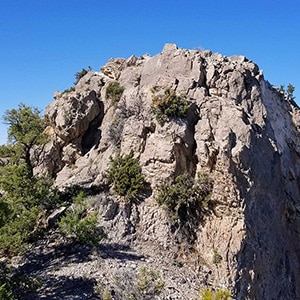