Proximity of This Fossil-Rich Environment

Where can you walk out your back door and discover a previously unknown ancient dinosaur or mammoth fossil? The slide show on this page will show that fossil! I have walked to this area from my back yard, but today saved some time by driving to The Desert National Wildlife Refuge Visitor Center and starting from there.

Some of These Fossils May Be Up to 4.5 Million Years Old!

I’ve previously visited the better known Western portion of Fossil Ridge. There are ancient nautilus fossils embedded in the rocks at the Northern base of that ridge, potentially 4.5 million years old from an era when the earth had only one continent, Pangea. These are also pictured in the slide show and video along with where to find them. What a wonder that this area, once under an ancient sea, is now between 4-6,000 feet in elevation! By the way, I also discovered ancient nautilus (ocean) fossils at 11,000ft in the Mt. Charleston Wilderness near Mummy’s Toe.

Fossil Ridge Stretches Much Further to the East

During previous trips I noticed Fossil Ridge continued, much higher and grander stretching miles further to the East. More hidden fossils to discover. The far Eastern stretch of Fossil Ridge is off the beaten path. There’s a sensation of standing in a place here where no one has stood before. Every step holds a new discovery. I know I missed many more fossils than I discovered today. In fact, it was only when I later photoshopped the fossil described above that I realized what I had been viewing.

Spectacular View from the Eastern Stretch of Fossil Ridge

And, the views from the Eastern stretch of Fossil Ridge are spectacular! There’s the Eastern side of an entire mountain range — the Sheep Range. And to the West, the expanse of Fossil Ridge and The Las Vegas Range. But the jewel lies in the massive valley between…the largest most incredible Joshua Tree (Yucca) forest I’ve ever seen. You could fit a good portion of Las Vegas into this valley — all this within  20 miles of the Las Vegas Metro area. In addition to all this, views of the Mt. Charleston and La Madre Mountains wilderness areas in the distance.

Don’t worry about the crowds, even in the busiest of days. Almost guaranteed: You will not see a soul during your entire adventure. But watch for sudden, steep treacherous vertical drop-offs as you traverse loose rock surfaces. All this aside, the best time to visit this area is in the Fall or Spring. Winter can bring icy conditions above the drop-offs just mentioned, and Summer can bring temperatures approaching 100 degrees!

Take 1-95 North from the Las Vegas Strip about 10 miles past the Mt. Charleston/Kyle Canyon Road exit. Then take a hard right (no off ramp) onto Corn Creek Road…small brown directional sign marks the Desert National Wildlife Refuge headquarters. Travel up Corn Creek Road about 3 miles to its end at the DNWR headquarters where there is usually ample parking.

Being on foot for this entire adventure meant a longer approach time. However, it also gave me much more flexibility to wander off-road and not be constrained with the thought of retracing my steps back to a car. It’s a trade-off.

Head up Mormon Well Road from The Desert National Wildlife Visitor Center (it’s a right turn at the first junction). As you ascend Mormon Well Road, take time to look back at the gradually unfolding glory of the Mt. Charleston and La Madre Mountains wilderness areas, especially brilliant in the morning sunlight. You can even see portions of Red Rock Canyon, The Rainbow Mountains and Potosi Mountain if you know what you’re looking at.

The first and only intersection you encounter around 4-5 miles up is Gass Peak Road. View some amazing adventures in the Gass Peak area. It’s definitely worth a visit to stand on a peak that beats any view of Las Vegas seen from an airplane.

Fossil Ridge is less than a mile up Mormon Well Road from the Gass Peak intersection. Curiously, the very best fossils to be viewed on this Western portion of Fossil Ridge are at the base of the ridge only a few steps from the Fossil Ridge sign! I’ve ascended to the summit of the ridge and found no greater concentration of fossils than right at that sign! Being from Oregon and the rocky Oregon Coastline, it’s not hard to imagine ancient ocean waves crashing against the dark rocks along the base of Fossil Ridge.

The gap between Fossil Ridge and the Southern end of the Sheep Range is called Yucca Gap. As you emerge on the Eastern end of Yucca Gap you’ll see, stretching before you the most huge, incredible Joshua Tree forest…perhaps anywhere! Take a right off Mormon Well Road to circle around the East end of this section of Fossil Ridge. Here there are more fossils, always in the darker rocks. You also see the continued crescent expanse of the higher, grander Eastern stretch of Fossil Ridge.

On this day I located and ascended a gully near the beginning of the Eastern stretch of Fossil Ridge. It’s near that gully that I came across a dinosaur or mammoth fossil. Curiously, first looking at that rock, it appeared there were long plant fibers. That clued me into the fact that this was likely an ancient fossil. Only when later photoshopping the image of those plant fibers did I see what looked like the vertebrae of a large animal. In fact, I may have been looking at a plant that animal had digested! See the slide show on this page.

Ascending to the Ridgeline Summit, Discovery of a Path

The stretch up that gully felt like entering into another, unique world where few if any people had ever stood. During the ascent, views of that huge Joshua Tree forest and the bordering mountain ranges continued to expand. Near the summit I came across a very very faint path, unsure whether animal or human. It’s possible that there is a pathway along the entire upper spine of the far Eastern stretch of Fossil Ridge. However, there are many sudden drop-offs along the way and a sheer 500-1000ft cliff on the Northern side of the ridge. All that aside, it’s a land of wonder up there, and merits future adventures! 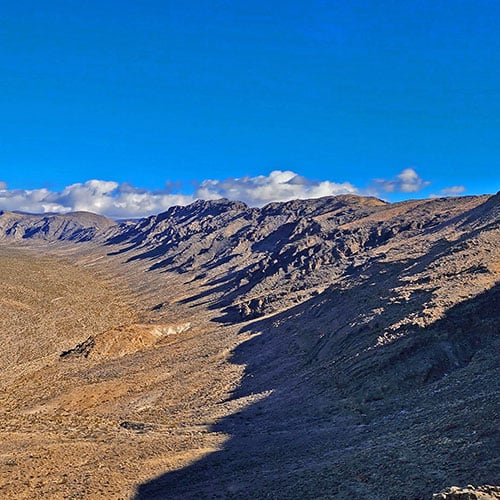