The Gass Peak Grand Crossing is a 30-40-mile ultra marathon distance on foot on a few roads, but mostly across desert wilderness canyons, ridges and avalanche slopes. 6,937ft Gass Peak is the 5000ft elevation gain midway.

In the slide show and video on this page you will see incredible sunrise and sunset views of The La Madre Mountains Wilderness and Mt. Charleston Wilderness. In addition there are views of the Sheep Range, Fossil Ridge, Gass Peak from every imaginable angle, Damsel Peak, the tip of the Rainbow Mountain Wilderness, Potosi Mountain, Lone Mountain, Frenchman Mountain, Lake Mead, the Muddy Mountains, spectacular views of the entire city of Las Vegas 6,000ft almost immediately below including the Las Vegas Strip and too many more landmarks to list here.

There is ample parking at the visitor center, ungated so that you can begin and end your adventure as early or late as you wish. The roads are so well kept that running them in the dark is not a problem.

This adventure, totally on foot, began at 5:25am at the Desert National Wildlife Refuge Headquarters, about an hour before sunrise and ended at 5:25pm at the North end of Rainbow Avenue in Las Vegas.

Circling Fossil Ridge and Heading Cross Country Straight for the Gass Peak Main Trail About 1,000ft Below the Summit

As reached the West edge of Fossil Ridge I once again left the road to seek a more direct cross country route around Fossil Ridge. Upon rounding Fossil Ridge I set my sites for what looked like the ridge of the main Gass Peak Trail about 1000ft below the summit. This direct short cut to that high point may not have been the best idea. The many intervening ridges and canyons were is some cases a 2-300ft plunge followed by a re-ascent. This really ate up a lot of time and energy so that by the time I finally reached a point about 1,500ft below the summit I found myself pondering whether the best decision might be to head back to the Desert National Wildlife Refuge or continue on up to the summit of Gass Peak.

Future Note: Were I to do this adventure again, I might stay on Gass Peak Road all the way to the Gass Peak Trailhead. Maybe not.

Final 500ft Up a Connecting Ridge to the Main Trail

There seemed to be a ridge that might intersect the main Gass Peak Trail about 1,000ft below the summit, but it wasn’t clear whether there might be another huge canyon blocking the way. I rested a bit, then, refreshed, decided to at least continue up another 500ft to what appeared to be the likely main trail intersection. The factor that helped me decide to continue up was a thought that if that was indeed the main trail intersection just 500ft above, I  was more than half way to the end point in Las Vegas and therefore, summiting Gass Peak would actually be the path of least resistance! So I continued upward.

Turns out the intervening ridge and hill route did indeed connect with the main trial about 500ft above. And, it appeared I was not the only person to ever travel this ridge system as there was a faint trail that intermittently appeared and disappeared along that ridge..

Once on the main trail it was a relatively easy stretch to the summit of Gass Peak, and about half way the incredible views of Las Vegas began to open up to the South with expanding views of Fossil Ridge and the Sheep Range to the North.

After a few moments enjoying the spectacular 360-degree views from Gass Peak Summit (see the video and slide show on this page), I set my sites down what I refer to as The Gass Peak Gauntlet, which is the 1-2 mile upper ridge of Gass Peak from its Eastern to the Western end. The nature of this stretch gave rise to the name. The terrain is loose rock avalanche slopes along the upper North side of Gass Peak with many sheer drop-offs. There is no trail and you can only see your route the next 100ft ahead at any time. Sometimes, you can only determine your “best route” the next 25ft ahead. The strategy for navigating the Gass Peak Gauntlet is to”

It helped that I had traversed The Gass Peak Gauntlet going the other direction once before. However, you know how when you traverse a wilderness area in the opposite direction from a previous passage everything looks different! All said, it was one careful foot placement after another for 2 hours!  Many foot placements seemed good for only about 10 seconds, so keep moving.

A couple hundred feet from the beginning of the Western Ridgeline, there is an approach ridge for descending Gass Peak via what I call the Gass Peak Western Approach Canyon. The beginning of the approach ridge is marked by a cairn. The approach ridge is a pretty steep plunge, but not quite as steep or unstable as The Gass Peak Gauntlet. Create your own switchbacks, or follow the faint switchbacks already existing on this slope. About half way down the slope there is a short, level rocky outcrop. Descend to the right about half way across this outcrop, then hug the outcrop just below its summit until you’ve circumvented it and can continue along the approach ridge until it ends with a deep gravel pathway/road.

Take the narrow, deep gravel pathway/road through the remainder of the Gass Peak Western Approach Canyon until that canyon opens up, crossed at its base by a 4WD road. Take a left at the 4WD road to skirt the mid North side of Gass Peak to an opening on the West side between Gass Peak and Castle Rock. The opening is pretty clear as you can now see the city of Las Vegas below across the intervening desert.

Traversing the Desert Toward Las Vegas

After about a mile the 4WD road will take a sharp left. At this point, continue straight across the desert setting your sites at 2 small peaks in the distance on the other side of Las Vegas. These peaks will be your point of reference until you reach the North end of Rainbow Avenue and civilization! See the video where I identify these points of reference. A wrong turn across the desert could lead you West to the Tule Lake area or East to the Strip. Stay on course!

Two Borderline Crossings in the Desert

Along the way you’ll pass the Southern border of the Desert National Wildlife Refuge, marked with a pretty well-built fence with 2 large metal cables strung between a series of thick wooden posts stretching the entire East/West length of Gass Peak and far beyond in both directions.

Continue downward past the border fence to the next Southern border marker…an East/West stretch of large main power lines and a 200ft wide dry water channel. Now you’re only about 1-2 miles from the North end of Rainbow Avenue! You might pick up another 4WD road that takes you all the way to Rainbow Avenue and The Palms at Silverstone Ranch residential community…the end point of this adventure.

Conclusion at the North End of Rainbow Avenue in Las Vegas!

It so happens that I live in The Palms at Silverstone Ranch, but if you do not, and you have 2 cars, you could park one car in a small parking area here at the Northern end of Rainbow Avenue and take the other car to the Desert National Wildlife Refuge headquarters to begin the Gass Peak Grand Crossing from there. It’s well worth the trip! My total time was 14 hours and could have been shortened by a couple hours with some route refinements. 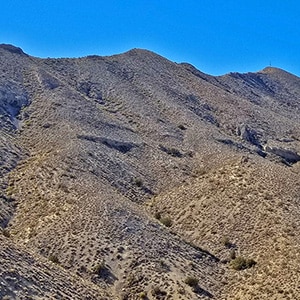